HERE’S WHY: President Obama had the toughest of tasks for this speech. He did everything he needed to do to jumpstart his mojo. Almost. See the bottom for the one thing he lacked.

DISCLAIMER: My job as “Your Connection Coach” is to provide an unbiased evaluation of a speech, not the person nor his political party. My commentary reflects the my professional opinion about his presentation, not the accuracy of facts, nor any personal feelings I have about the presenter. The POTUS’ speech is always draws the most scrutiny. To ensure fairness and accuracy, I viewed the 2012 speech twice, reviewed his 2008 acceptance speech, as well as his 2004 DNC speech before writing this review.

Coming into what was arguably the most important speech of his political career, President Barack Obama had to come up big–really big–in order to regain the trust of both his party and the independents who are sure to determine the outcome of this election. Because of this, the objectives of his speech were very complex, requiring him to multi-task within every sentence, loading up on political dogma, allusions to the future, double entendres, and witty one-liners. He had to exude his trademark swagger. He traded in Senator Obama’s pale blue tie from 2004 for President Obama’s much bolder and authoritative blue in 2012. It was on.

If President Obama did have one note card on the podium, it would remind him of his key objectives for this speech:
1. Rally his base that is growing weary of feeling like they’re on a sinking ship that is taking direct hits from multiple attackers.
2. Renew America’s faith that the “Hope/Change” juggernaut they voted for is still alive, and it wasn’t just a clever campaign ploy to get elected the first time.
3. Redirect the sting from GOP attacks on his leadership, his policies, and his record while in office
4. Redefine with absolute clarity his case for getting elected to a second term,
5. Remember not to get upstaged by Bill Clinton!

Speaker Note For YOU: I cannot stress enough how important it is for you to “begin with the end in mind” when you speak. What is your measuring stick by which you will judge your success? Where do you fit in the grand scheme of the program? Why did they choose YOU? Knowing the answer to these important questions is essential to choosing the right message, the right stories, and even subtleties such as the right tone of voice.

1. “Take two tax cuts, roll back some regulations, and call us in the morning.”
-A la Bill Clinton the night before, Obama oversimplifies the GOP message, attacks it, and adds as laugh in the process. This line was designed for USA Today headlines and CNN sound bites the next morning.

Speaker Note For YOU:Be aware that people today more than ever are more influenced to snippets versus entire chunks (Many won’t even read this far into my review because it’s “too long”). Plan for it. Systematically insert catch phrases such as these in your presentations. One-liners…especially Twitter-friendly one-liners are like gold for making your message go viral. Think JFK “Ask not what your country can do for you…”

-This technique is a version of what I call a “waterfall.” You start at the top and string a common thread all the way down to the bottom. Example: Owners must provide championship facilities, coaches must instill a championship mindset, players must put forth a championship effort, and fans must show up and cheer us all the way to the championship.” This is the opposite of the “Us vs. Them” mindset. It unifies every role of the organization and delineates everyone’s equal responsibility in “our” ultimate success.

3. “You didn’t elect me to tell you what you wanted to hear; you elected me to tell you the truth.”
-This statement is loaded. The subconsciously-implied messages are 1) You trusted me enough to vote me in. 2) I am aware of my duty and responsibility to you, and 3) What I’m about to tell you is factual.

4. “Help me recruit 100,000 math and science teachers within 10 years and improve early childhood education.
-Smart. This allusion to a brighter future was done brilliantly. He gave two measuring sticks: the amount of teachers and the timeframe in which they should be added. In addition, he tied this goal into a problem that everyone sees as America is slipping in its world ranking. Lastly, he set a 10 YEAR GOAL, although his next term is only four years. This, once again, appeals to the subconscious mind to envision his goals being achieved even beyond his presidency–but it starts with him being re-elected. Did you catch that?

5. “My opponent and his running mate are…new…to foreign policy. But from all that we’ve seen and heard, they want to take us back to an era of blustering and blundering that cost America so dearly.”
-A not-so-subtle jab to Romney and Ryan’s inexperience on an international level. Ironically, this was the same criticism he faced as candidate Obama in 2008. However, Obama adds extra umph to the jab by “saying without saying” that these guys are a throwback to George W Bush, the most unpopular president in modern times, and the last Republican to hold office prior to him. He is “saying without saying” that “these guys all think alike. If you remember how you felt about Bush, you’re going to feel the same way about Romney.”

6. “After two wars that have cost us thousands of lives and over a trillion dollars, it’s time to do some nation-building right here at home.”
-This line answers the common objection held by many Americans “How do we have money for bombs but we don’t have money for books?” Obama uses this line to point to better times for America when the war ends in 2014 (two years into his new term).

Speaker Note For YOU: Any persuasive speech must illustrate the benefits of accepting your solution. Get your audience to see themselves, thinner, richer, happier, having more free time, etc. Once they can see it, the only thing left is to sign on the proverbial dotted line.

7. “Corporations, or welfare recipients, or immigrants, or gays, or any other group WE are told to blame for our troubles.”
-Obama appeals to the common American by stepping off his podium and into the audience. He positions himself as an American, not the American President. In addition, he reaches out to (very large) voting blocks with a verbal wink that says “I’m fighting for you.” President Obama went *hard* for the female voters. Notice the gender reference that he made that traditionally would have been male:
-“Small businessWOMAN”
– “No child should have HER dreams deferred…”
-The young girl] can become the President of the United States
-“An immigrant won’t be deported from the only country SHE has ever loved.”
-“Healthcare choices that WOMEN should be making for themselves.”

Speaker Note For YOU: Know your audience! Know who you need to get on your side. Words like “we” and “our” are gold. Even if you don’t belong to the same organization as your group, using the first-person plural puts you in the same boat as your audience. “WE were led to believe this…” “WE see this every day when WE come to work…” Even when it isn’t true, PEOPLE DON’T OBJECT!

8. “The election four years ago wasn’t about me; it was about you. You were the CHANGE.”
“If you choose to turn away now, if you give into the cynicism that the CHANGE we fought for is impossible, CHANGE will not happen.”
-These two statements didn’t appear back-to-back, but they were in the same train of thought. In his most surprising move, President Obama remixed the Hope/Change message from one that is unlikely (providing a “new Washington” in which government cooperates) to the *voters* being Hope of America. He switched it. The burden used to be on him. It didn’t happen. Now it’s on “you,” the American people, who have to take it upon yourself to BE the Change. This move was an answer to America’s weariness with hearing about a concept that clearly wasn’t coming to fruition. Instead, President Obama says, “If you want Change, be a part of this movement that I’m leading. Let’s create Change from the bottom up, not the top down.”

Speaker Note For YOU: In a time of “done for you” solutions, a message of personal responsibility has tons of value. The American Dream and value system is to work hard, make sacrifices, and get to the top. It’s hard to argue against it. Make sure your message provides a goal and action items that take your presentation from a “speech” to a roadmap.

President Obama has a unique voice. He has a charismatic persona. He is a good-looking guy. That said, he still has to avoid going overboard. At key points (which were pre-scripted), he changed his tone from presentation mode, to talking mode, like it was a one-on-one conversation. It’s called “vocal variety.” Watch the speech again. He even changes his voice to a near whisper to shift the emotional tone and draw in his audience. He told them, “Youuuu did that,” not “YOUUUU DIIIIID THAAAAT!” Same line, different outcome.

In a move I have yet to understand, President Obama made his case for re-election, but failed to use the imagery that is so vital for making your message “stick.” Mitt Romney and the GOP used this tactic masterfully at the RNC to cast doubt about Obama’s credibility. It was powerful. Clint Eastwood portrayed Obama in the empty chair, depicting his purported absence of leadership. In his acceptance speech, Romney referred to Obama’s policies as “attempting to sail on yesterday’s winds.” Wow! Images like these stick in people’s minds for months, years, or even decades.

What was the “theme” of President Obama’s biggest speech? A New Path? Choose Your Future? Making a logical, left-brained cased for reelection is great, but what the average American will remember is the mantra plus one highlight. That’s it. He abandoned his own strategy from his 2008 acceptance speech. Approximately 14 minutes in, he delivers almost an identical line as 2012 referring to the GOP doctrine, but in a very different fashion.

This missing element is the difference between delivering a very good speech and a crafting a piece of history. 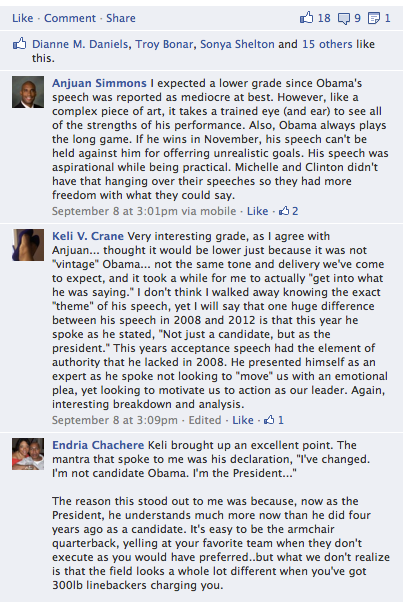 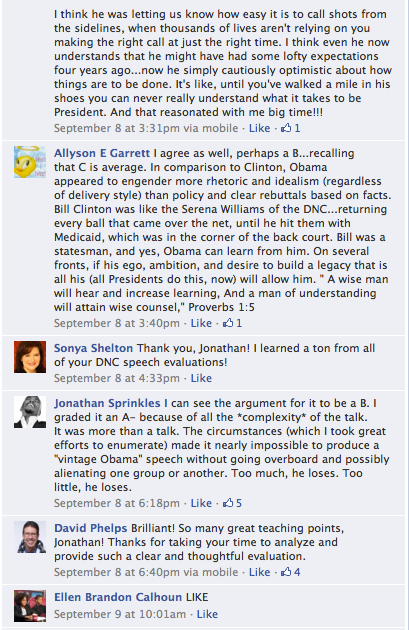 You can leave a comment below this article. I would love to hear your thoughts on President Obama’s Speech.