Candy Crowley did a good job, although she too, at times, was ignored by each of the debaters. This is not uncommon in political debates. Where she excelled most was how she positioned the need to move on to the next question. She said that the *people* had been patiently waiting to ask questions. Brilliant! Candidates will bulldoze a moderator in a heartbeat. We’ve seen that. But what candidate would bully, on public television, an audience member and look like they cared more about scoring political points than listening to one of his constituents? Crowley, in effect, was saying, “It’s not just me, it’s all of them you’re ignoring.” Loved it.

One key factor that you may not have noticed was Crowley’s physical position on the platform. She was sitting level with the candidates. Contrast that with Lehrer’s position in Debate 1, seated below them as though he was in an orchestra pit. Pay attention. This makes *all* the difference in how you are received. There is a reason why speakers, entertainers, pastors, etc. present from an elevated platform; it implies power. Thus, she was able to assert herself and command respect when needed. Perhaps the next moderator will sit in a skybox on a golden throne?

OCCASION:
As I predicted, Debate 2 was much more heated. Both candidates were ready to get it on Gangnam Style! Obama had confidence to regain; Romney had momentum to protect. Had this been another blowout, the third debate would have been a coronation. The stakes were highest in this debate and it showed from the opening whistle.

Two important elements deserve to notation: 1. Neither candidate spoke from a podium. Most of their retorts were delivered without notes! That by itself is very impressive. If you’ve never had to listen to and debate someone’s rhetoric, in public, on a major platform, it is impossible for you to fully appreciate what a herculean task that is. I, as well as thousands of “armchair debaters” get to pick them apart in the comfort of our homes, but it is unlikely that we present ourselves anywhere nearly as well as they did in similar circumstances. Hats off. 2. The room setup was extremely difficult to operate in. Who do you focus on—the person who asked the question, the moderator, the rest of the audience to which you have likely turned your back, or the television cameras? And one more…handheld mics are awful for public speaking. Podiums were invented so speakers wouldn’t have to hold them as well as their notes. Lapel mics were invented in the same vein. The debaters had their work cut out for them.

1. WORD PICTURES – Once again, Romney went back into his persuasive tool belt and used his favorite tactic—painting emotional word pictures. He used his favorite term “unraveling” (instead of “failing”) when referring to Obama’s foreign policy. He said on several occasions that he middle class has been “buried” (instead of “forgotten”). He even told a short story of coal workers “grabbing [his] arm saying, ‘Save my job.’” All of these, you can SEE. The latter story is highly unlikely, but I still give him credit from an elocution standpoint.

2. “LOOK” – Obviously he and Paul Ryan got together and decided on which key words they were going to own in their campaign. “Look” is one of them. Ryan used it heavily in his debate. Romney used it less (thankfully), but still effectively. Here’s why: the word “look” is a subconscious trigger to get the listener to tune in to the message following that word. If a parent says, “Look at me,” the next command means business. When a speaker says, “Look” followed by a short pause, it creates a tempo change. Ears perk up. It that means he or she is about to level with you. You should accept his or her next statement as fact.

3. MESSAGING – If Romney were to win this election, it would be because of one thing: Mitt Romney stays on message. He makes no bones about it; he is doubling down on being “all about jobs” and bolstering small businesses. All of his rhetoric is focused on these two areas. It makes it easy for those who share his belief that this is the key to America’s success to jump on board. He continually says, “We deserve better” and “We don’t have to settle.” His consistency has been on point.

Speaker’s Note: What word or phrase would be associated with you? It had better be the right one or your brand is in jeopardy.

4. DEMEANOR – Mitt Romney is an executive through-and-through. He has executive presence. Contrast him with his McCain from 2008, who is a career politician, and it shows. Romney has been in boardrooms and negotiating in closed-door meetings, and it shows. Obama can become aggressive; Romney is aggressive. That said, Obama came out punching in this debate. We all knew he would. But unlike the GOP primary, Romney didn’t allow himself to become flummoxed when his feathers were ruffled. Gingrich got under Romney’s skin. He looked angry and almost out of control. Obama would have scored major points had Romney turned green and went into Hulk mode, thus proving that he was the mean rich guy he has been portrayed to be. Not so in this debate.

5. BROKEN RECORD – Romney has done a great job not letting Obama get away from what he calls the “unkept promises.” For Romney’s base, this is gold. He harps on his list of Obama’s promises versus what he has actually delivered in office. Romney is good about then saying how he will fix it. In his strongest point, he mentioned his record as a businessman, with the Olympics, and as governor having balanced budgets in each position.

1. “HOW” – This is admittedly a debatable topic, but as an observer, it was blaringly obvious that Mitt Romney isn’t going to get into specifics. He explained four ways, in detail, how he is different than George HW Bush, but even when pressed to give specifics about his Five Point Plan, he retreats into broad-based diatribes about how he “knows what it takes” to get the economy on board. For some reason, he even abandoned his strategy of short, simple, punchy lines—that were working! For his loyalists, this is acceptable. Anyone not named Obama would get their vote. For people hungry for substance, Romney leaves them empty. As controversial as this statement may be, these non-substantive, ambiguous claims are the Hope/Change of 2012.

Speaker’s Note: As a persuader, you must take into account all learning styles. Some will be enraptured by charisma, others require facts and lists.

2. WOMEN – If Romney loses this election, this may be why. On several different occasions now, he has faltered in his characterization of women, killing his Persuasion Power. He referred to “binders of women,” then when asked about workforce equality for women, his answer was to build a stronger economy (What?). Finally, in the fait acompli, he essentially *blamed single mothers* for gun violence in America! The question was about a ban on AK-47 assault rifles and he spun it into a public service announcement for families to get married before they have children. Dude…you’re kidding, right?

*Note: Mitt Romney gave an endorsement for affirmative action when he mentioned that none of his applicants were women so they went on a hunt for qualified women to work on his staff. He made special provisions including flexible work hours because he felt it was important to have that demographic in his workforce. That, my friend, is the very definition of affirmative action. No further questions your honor…

Speaker’s Note: You can’t tick off people then ask them to do something for you. Be up front about how you feel and why. Communicate that early and often to avoid misunderstandings.

1. ATTITUDE – Obama was “back” in this debate. People were questioning whether his heart was still in it after Debate 1. Clearly, it still is. That’s what his base and some undecides needed to see—a man who was going to fight for his job. Although both he and Romney took turns not answering questions at various points (he totally sidestepped on Libya when asked why they didn’t respond to requests for more security). But as I mentioned up front, we all know the rhetoric. This debate wasn’t about that for Obama. It was about showing that he still has some fight in him. He was 1000% more focused this time.

2. ZINGERS – I wouldn’t be surprised to later find out that Barack Obama secretly consulted Jay-Z for help with a few bars of lyrics. He had tons of one-liners that he to light up the Twitterverse:

As I have discussed, one-liners have never been more important due to social media. Speakers who want to create buzz about their message quickly must pre-plan these lines and strategically insert them into your presentation.

3. REBUKE THE REBUKE – Obama didn’t back down this time on Romney’s assaults. He used a rhetorical tool called “reframing” to counter Romney’s claims about him being such a failure. “What I’ve tried to do is be consistent,” he said. That one word changed the focus of the debate from his policy to his consistency, which is a subtle play on his integrity and character. Smart. His record in some areas is weak, but by reframing it into a totally different category, it redirects the attention from a won/loss record to another area in which he has more leverage.

*Note: For the sake of space (and focus), I am primarily focusing on Obama’s presentation weaknesses.

1. VOCAL VARIETY – Romney does this well. Obama struggles with this. When he becomes passionate, his voice rises and never comes back down. If I were coaching him, I would insist that he uses some pauses to break up his monotone pitch. Go high, pause, then go low, then finish off on a high. Create a contrast. This is also a strong debate tool for showing sarcasm with tact.

2. NON-VERBALS – I reiterate, Barack Obama can become aggressive; Mitt Romney is aggressive. When Romney stood up to challenge Obama on oil, Obama turned his back to him and said, “What you’re saying is simply not true.” He should have taken Romney to the streets of Chicago! Speakers, step INTO your power lines! Instead, he could have won that exchange by taking a small step forward and saying, “Sir, go read the facts then come talk to me,” then turned his back and sat down.

Another platform faux pas was turning his palm downward toward Jeremy, the 20 year old college student. That’s a silencing tactic. He should have turned it upward to say, “I’ll help you.”

3. ZINGERS – Yes I listed these as a strength as well. He was good, but he could have been legendary had he “stuck the landing” on a few of his power lines. He is what some of his debate power lines could have sounded like with a little work to add force to the jabs:

A. “What I’ve done is something my opponent has failed miserably—be consistent.”
B. “He has a One Point Plan” (Raise index finger high, then let it drop, symbolizing its failure.)
C. “Let me clarify who that 47 percent is—all of you in this audience. You who are hard workers but don’t have the privilege of esteeming yourself as rich. How do you feel now?”

Below is a screenshot of a few of the many Facebook comments left on this VP Debate Analysis; to see them all visit http://Facebook.com/jsprinkles 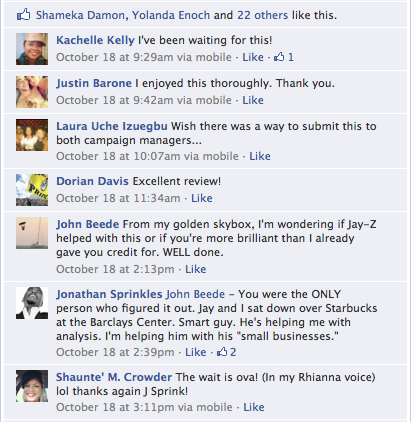