Jim Lehrer was AWFUL. He allowed himself to get bullied, never kept the time, seemed to miss key discussion points, and brought the energy level down to Zoloft levels. Bad choice.

Great, great, great job! He is a seasoned debater. His skills staved away a fierce Republican contingency in the primaries. On economic issues, he speaks like a businessman who truly “gets it.”

He had a lot of ground to gain. He got bludgeoned by Bill Clinton at the DNC. Badly. This was his first time back in the spotlight. He needed to show his supporters and his party that he can take a lickin’ and keep tickin’. He did that. He’s mentally tough. He speaks slowly, uses his deep voice, and utilizes short sentences to “jab” Obama into looking incompetent. “It’s expensive. Expensive things hurt families.” This makes it possible for EVERYONE to understand his point and seemingly rises above political rhetoric. Mitt Romney had a line that has already been retweeted millions of times “You can have your own house, your own plane, but you cant have your own facts.” BAM!

Romney was low on specifics. He talks about what he would do, but rarely says HOW. However, (most don’t realize this) as the challenger, you don’t HAVE TO be specific! Debates are about headlines, not the practicality of his solutions.He knew this and took advantage of his position wisely. Romney’s biggest weakness could be realized if your television was on mute: his near-constipated plastic smile while Obama spoke. Part of being president is non-verbally communicating to America “You will like seeing me for the next four years.” Not the case tonight.

This is where you have to be a “pro” to see the nuances. You can’t just say “Obama was this or Obama as that.” You have to think deeply. Ask WHY this was the case when he has the ability to be a strong communicator. President Obama was in the lead. People have criticized his performance, but as a strategist, the incumbent would have been foolish to lay his cards out on the first debate. Romney had something to prove; Obama didn’t. Romney had to make noise; Obama didn’t. His plan was to see Romney’s cards, then come back stronger in later rounds.

Obama was soundly beaten in this debate, but he did two things well: smile often (his strongest card is his likeability) and continue “jabs” of his own about Romney being for the wealthy few. He did his job.

Obama lacked his classic fire. The last time we saw him was his DNC speech. He looked like a different man then. Bill Clinton said, “America would rather you be strong and wrong than weak and right.” Right/wrong aside, he didn’t show strength. He seemed disinterested in locking horns with Romney and having a battle of wills. Obama’s verbal and non-verbal passivity made Romney look like he was right. He failed to harp on Romney’s lack of specifics. He failed to share more personal stories about the circumstances around his convictions. He failed to speak in short, tailor-made, headline-ready sentences. Thus, his rhetoric was easily forgettable. 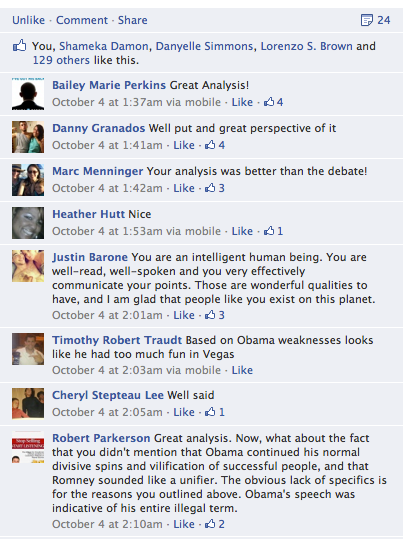 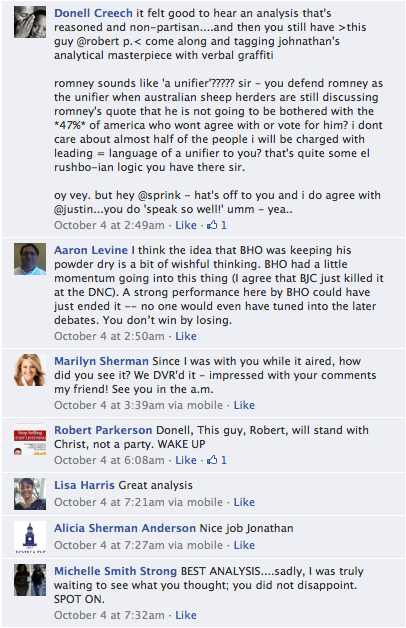