MODERATOR—First of all, the most salient contrast to this debate was not the close quarters in which the two pundits squared off, it wasn’t their multi-generational age gap—it was the presence of a legitimate moderator. Martha Raddatz, a seasoned war correspondent, did a great job of guiding the conversation and using her journalistic instincts to dig deeper and ask tough, probing questions when each contestant danced around a solid answer. This was much closer to what we expected (and deserve) from a debate of this magnitude.

As I continue to reiterate, before any speaker steps up to the podium, he or she must have an existential understanding of where he or she fits in the grand scheme of things (ie. the conference program or campaign). For Paul Ryan, his marching orders were simple: We’ve closed the gap—DON’T SCREW UP! VP debates don’t win elections, but they do build momentum. That said, Ryan did what he was supposed to do; stand firm in his position, continue to appeal his case to his loyalists, and look like a guy who had the moxy to run a highly-divided congress (SPEAKER NOTE: With every assignment, there are *always* intangible, even unspoken expectation. Your job is to know every layer and handle each objection. For example, being a “cultural fit” can be of equal importance as anything on your resume’).

Paul Ryan’s specific highlights, from a persuasion standpoint, were:
1. (When asked if the US should apologize for urinating on Taliban corpses) “Goodness yes. What we should not apologize for is standing up for our values.”
Slick move. He whispered the Yes for the record but spun it into a moment of stalwart patriotism. That wasn’t the issue, but he attempted to make it the issue.

2. “What we see here is the unraveling of the Obama foreign policy.”
Great use of imagery, a la the RNC. “Unraveling” is something you can see versus “failure” which is vague. One word makes *all* the difference in your sentences!

3. “As the Vice President can attest, the words don’t always come out as expected.”
LOL moment. One of his speechwriters has a funny bone. Good quip. Even Joe Biden was stunned. All he could do is laugh at the “zinger.”

4. “Was it a good idea to spend taxpayer money on windmills in China? Where are the five million green jobs you promised?”
In a rare moment of unbridled emotion, Ryan hit hard with direct questions that were verbal landmines for Joe Biden to walk into. These are the loaded questions in court that send people to the slammer. SPEAKERS NOTE: This technique is a version of a Straw Man; asking a question that isn’t really a question but really intended to make a point: “Did you ever think about your family the night you CHEATED ON YOUR WIFE?”

Perhaps I am the politically under-exposed dimwit in the room, but I never knew of Paul Ryan prior to this election (You too? Okay, now I feel better.). After now seeing him twice on the main stage, I still don’t know him. From a delivery standpoint, he speaks very monotone, his cadence is reminiscent of someone who is reading, and he has yet to touch me emotionally. Part of persuading someone is the KLT Factor: Know, Like, and Trust. The latter is largely a byproduct of the former. Paul Ryan doesn’t emote much. He gives facts and statistics, but what moves people is when they can say, “I really dig this guy. I would love to work from him, buy what he’s selling, have him on my kickball team”…something! Ryan makes me feel like I would like him a lot more after a few drinks. What would he say off the record? Does he really mean what he’s saying or is he just trying to get elected? When his mouth wasn’t full of manufactured taglines and campaign rhetoric, could we be homeboys…pardon…buddies?

Paul Ryan’s low moments were (to name a few):
1. After being called out for not being specific by the moderator and by his opponent, he responded with…more campaign rhetoric. As a persuader, there is a time in every presentation when the presenter must look one audience member in the eye and say point-blank how he or she feels. Romney did this with mastery. Ryan swung and missed. This would have been the moment to pull out one of Mitt’s short, jabbing lines, “This is expensive. Expensive things hurt families.” Instead, Ryan missed key opportunities by lobbing out lofty responses (that could have been accurate) but whose poignancy was diluted due to his inability to just be “Paul”, not candidate Ryan. SPEAKER NOTE: When you want people to remember your key points, speak in bullet points, not paragraphs.

2. When Joe Biden referred to the thank you letter Paul Ryan wrote him for the stimulus money, (go back and watch it) Paul Ryan *lowered his eyes!* His non-verbal communication to America said “guilty as charged.” Bad, bad move! Credibility = lost.

3. Ryan’s answers were often about Obama’s wrongs versus the rights of his platform. This is a fundamental error. Any salesman will tell you that you don’t sell more of your products by enumerating your competitive advantages, not by bashing your competitors.

Vice President Joe Biden is a powder keg. Every Democrat in America was 60 percent excited about his energy and 40 percent hoping to God that he didn’t curse. Biden understood his assignment; recharge the base, appeal to the Midwest swing states, and whip the young guy’s you-know-what. He showed himself to be the elder statesman, weaving in at least three references such as “I was there when…” referring to important events in the last four years. This sent the message “This guy has theories; I have experience.” Remember that moxy issue? Biden’s got it.

Joe Biden’s highlights:
1. “Bebe and I have been friends for 35 years. President Obama has met with him a dozen times.”
Joe Biden contrasted Ryan’s statements peppered with “been there, done that,” and LOTS of numbers to add credibility to his points. SPEAKER NOTE: To ratchet up your key lines, use numbers. “I called you 11 times” is more persuasive than “I have been calling you all night.”

2. “Stop talking about caring for people and show me a policy.”
Do you remember when Luke Skywalker blew up The Death Star by using The Force to hit it in the bull’s-eye? Same thing. This is what Dems criticized Obama for not doing in his debate; taking on Romney head on and painting him as a rich, out of touch guy who just wants to be elected. Joe Biden had the…moxy…to call it out. This kind of line is so effective because it reinforces a stereotype. Even if it weren’t true, Americans will subconsciously assume it was because of the pre-existing images about Republicans.

3. Non-verbal “gangsta” tactics
Some have likened Paul Ryan to Eddie Munster. If so, Uncle Herman wasn’t about to let the young guy rough him up. He showed toughness that his boss failed miserably to do. He gestured toward Ryan, he pointed at him, he chuckled as “the kid” responded (this is an age-old debate tactic), and SO wisely was the first to address the American public at home, asking them to “trust their instincts.” He basically said, “Step aside kid, I’ve got to talk to the people who elected me.” He took a BIG risk but it repeatedly paid off when he looked into the camera and let them get to know their neighbor Joey from Scranton.

Joe, Joe, Joe! Come on Joe! You can have the policy debate. From a presentation standpoint, Joe had some gaping flaws.

1. Interruptions.
I read one stat line that said Biden interrupted Ryan 96 times to Ryan’s six. At one point, he wouldn’t even let him speak. He took it too far and undoubtedly turned off quite a few undecides. Frequent interruptions make a person seem undisciplined, insecure, or even as though they’re covering something up.

2. Pointing.
I know, it seems like I just said this was a strength. Wrong. His gestures were strengths; his pointing was weakness. Similar to frequent interruptions, finger pointing (especially close up) crosses the line between deeply passionate and Real Housewives. To add insult to injury, he even pointed at the moderator, which wouldn’t have been horrible, but she was a woman—double trouble.

3. (Referring to Libya) “We didn’t know…”
Wow Joe! How about you just broadcast to the world that there was an intelligence breakdown. Biden could have said, “That was never communicated to us clearly” which is still the same thing, but not the needle scratch moment on such a hotly-contested issue. Even if it were true, you never, ever, ever admit something so damaging in such a plain fashion. There is a time to be specific and a time to be vague. I’m sure Biden wishes he could have had that one back. It cost him and the White House a lot of credibility. SPEAKER NOTE: As often as possible, anticipates the key issues, write them down on note cards, and rehearse your seemingly impromptu answers. Show emotion, but don’t get caught slipping. 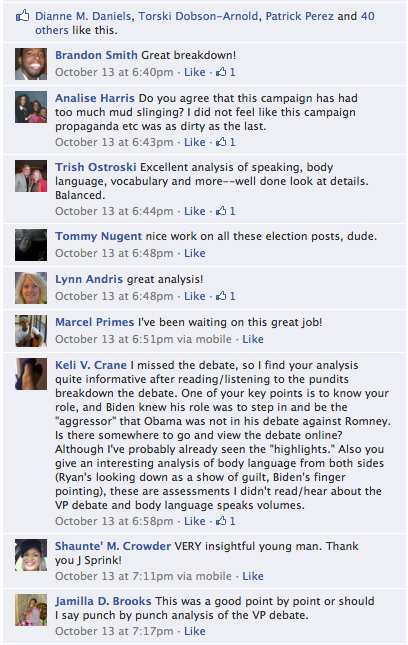 You can leave a comment below this article. I would love to hear your thoughts on this analysis.